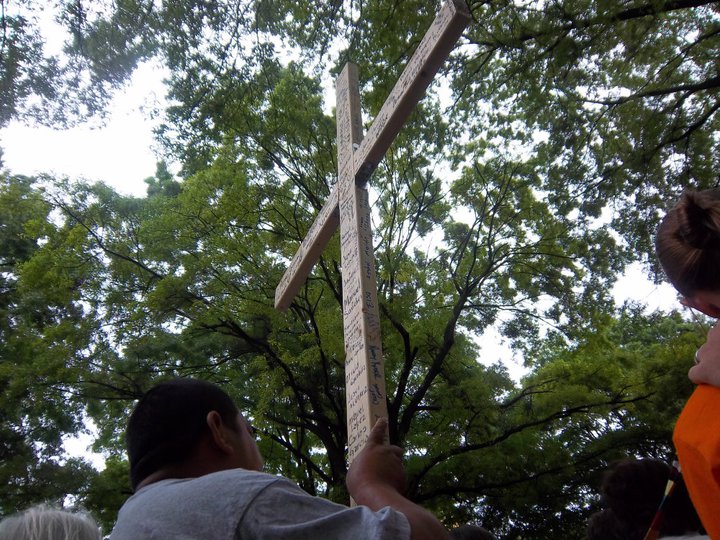 I sat in the lobby of the Stewart County Detention Center in Lumpkin, Georgia, waiting to see the detainee I had come to this prison to meet. I had visited many detainees at this place before, but this time it was different. A unique situation arose a week prior to this visit. At my church last Sunday in Americus, Georgia, (Americus Mennonite Fellowship), I picked up a schedule for Detention Center visitations and volunteering at El Refugio, a hospitality house a mile away from the Detention Center which offers free lodging, meals and spiritual solidarity to families of detainees. Immediately after returning from church I got a phone call from my mother in West Virginia. She told me that a new family had moved into her little Mormon Church branch in Pennsboro, West Virginia. A mother and two little girls (3 and 4 years old) walked into my parent’s tiny rural church that morning and told a story about how her husband (a Mexican undocumented immigrant) had been caught up in the detention center system and had sat for many months in Georgia’s Stewart County Detention Center. My mother told the woman that her son (me) lives in Georgia and periodically visits detainees at that very place. The lady (who I now know as Shanna) could hardly believe her ears! Shanna wanted to talk to me to see if I could possibly visit her husband. When my mother told me of Shanna’s story, I knew that God was somehow at work in all this, connecting our families and our churches together across hundreds of miles and denominational differences. I made a phone call to Shanna and promised her that I would visit her husband at the next available visitation day. She seemed so relieved and appreciative! Something happened to me in my conversation with Shanna as she shared about the suffering she and her children were experiencing as a result of being separated from her husband. I was overcome with empathy and truly felt compassion for her family. The little girls, named “Faith” and Hope”, so desperately need their father; the 4 year old has a serious heart condition which adds yet another layer of hardship to their situation. Shanna told me about her husband, Leo, who was feeling so alone, broken and hopeless as he sat imprisoned in detention, where the days turned into weeks and the weeks into months and without money or a lawyer is facing likely deportation. Shanna and Leo are Mormons, and Mormons put a huge emphasis on family. Leo has been living in the United States since he was 2 years old. He speaks little Spanish and has no family in Mexico – his only relatives are in the United States. After speaking with Shanna, I looked forward to meeting Leo in person.

So there I was, sitting with my thoughts, in the waiting room of the Detention Center. For some reason, my mind began to wander toward memories of long forgotten years, back when I was a young man, and still a practicing Mormon; the religion I was raised and immersed in from birth. After wrestling with faith for many years to find my place in God’s movement, I 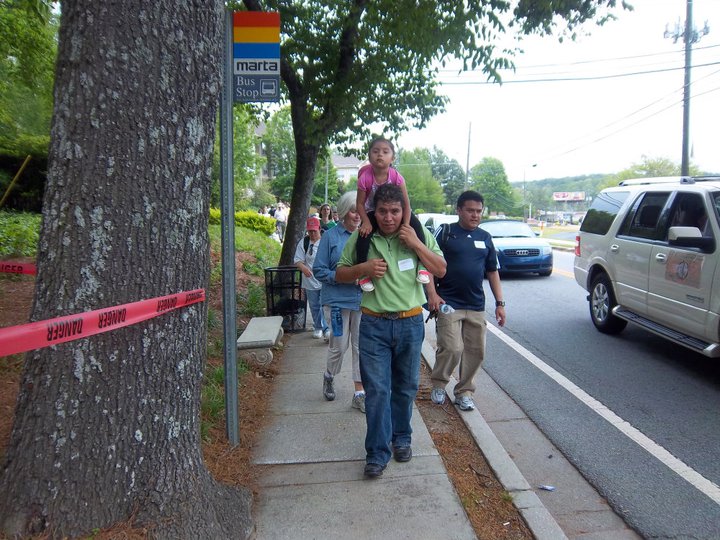 eventually gravitated away from Mormonism to continue my walk with Jesus in the Mennonite Church. I do not embrace all the tenants of Mormonism, but I don’t consider myself an ex-Mormon or an anti-Mormon at all. In fact, over the years I have developed an appreciation for all that is life-affirming and beautiful about the religion of my childhood. One of things I have a particular fondness for is the enormous sense of spiritual expectation that Mormons express about visiting their temples. There is a reverence in the way Mormons speak about their temple ceremonies. Stories are often shared about profound experiences, prayerful healings and divine insights revealed in their temples. Mormons will tell you that the temple is a place where the veil between heaven and earth is thin; where the Divine Presence is thick and the love of God is strong. It had been 18 years since I had last entered the hallowed interior of a Mormon temple, where disciples are led through a series of rooms and sacred rituals where each chamber represents deeper levels of mystery and discovery. There is no denying the fact that I myself experienced the Holy Spirit ministering to me within the temple walls so many years ago. And while it is true that I have also felt God’s presence in elaborately decorated Hindu temples, Mosques and Catholic Cathedrals; the Native American Sweat Lodge simplicity of sticks, rocks and mud is more my style, whilst having the same effect as their multi-million dollar sanctuary counter-parts. I have come to experience that whenever and wherever people come to pray and open their hearts to Love – God will show up, no matter how lofty and ornate or how simple and lowly that space might be.

As I reflected on these things, an idea flooded into my thoughts. This place, this Detention Center, is in so many ways unlike a temple – where a temple brings families together, the Detention Center rips them apart. Where a temple brings light and hope, a Detention Center brings darkness and despair. And yet, as I sat there waiting for the guard to call my name and usher me through the metal detector and the gates beyond, I began to take notice of a familiar feeling growing inside of me. Great spiritual expectation! This was the same kind of feeling I’ve had at the beginning phase of the Mormon temple experience; the same kind of experience I’ve had while preparing to enter the sweat/prayer lodge, being wafted with sage 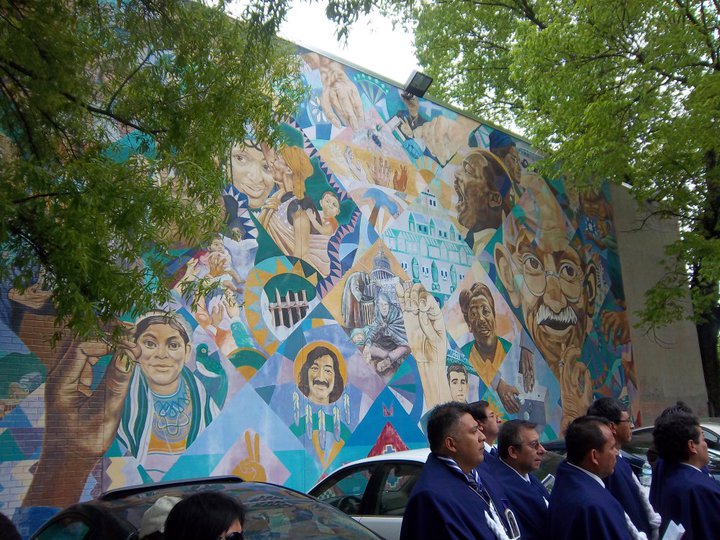 smoke, clearing my mind, knowing that I was about to have a meeting with God. “Sanders Thornburgh” the guard called. And I heard my wife’s name called, who was there by my side, and the names of others who too were waiting to visit friends, loved ones and in some cases, strangers. I was told to empty my person of all possessions – I had done this many times before, but this time it was different, symbolic, and meaningful; in order to go to the place where God is, I had to empty myself of all that must be left behind. I closed my eyes and walked through the detector – the threshold, the veil. I was led through a series of doors, hallways and chambers. After passing through a locked doorway, there was a short meditative pause before our group was given final entrance into the visitation room; the Holy of Holies. There, on the other side of a thick glass window, Leo was sitting, waiting to be visited by an unexpected stranger. I sat down and we looked into each other’s eyes through the window. I also saw my own reflection there and realized how easily Leo and I could have been sitting on reversed sides of the window, had life’s circumstances been different for each of us. Was I visiting Leo or was Leo visiting me? Yes and Yes! As I reached for the phone on my end, Leo simultaneously reached for the phone on his end. It was like I was looking into a mirror. The only word that can come close to describing that moment is the word “Namaste”; the presence of God within me greets the presence of God within you. It was at that moment that I knew for sure that what was happening to us was far deeper than what was happening on the surface – as we were in the company of one another; we were in the company of God. I was overcome with a sense of the divine and my heart automatically entered into a state of worship. During our time together, the prison had been transformed into a temple!

We talked for the full hour, and would have continued all day had we been allowed. I really like Leo, and completely enjoyed my time with him. My wife got a chance to visit with him as well. Leo told us that we were the only visitors he has had in the many months of his incarceration. He said that it gave him renewed hope to have new friends on the outside. Leo works in the Detention Center all day and is paid one dollar a day. At the end of the week, Leo has earned just enough to purchase an overpriced 10 minute phone card to call his wife and speak with his daughters. Most of the slave-labor in the Detention Center is done by the detainees, ironic because the Detention Center is a private for-profit prison who could hire U.S. citizens if they weren’t exploiting inmates and capitalizing on the sufferings of the poor. This private prison gets something like $60 per day per inmate from our government, which seems like an economic incentive to keep the prison full, beyond capacity, around 2,200 last I heard. The bureaucracy is often slow, with detainees sometimes waiting months or even years for court hearings or deportation. Leo shared how painful it is for him to be separated from his family. His heart breaks for his daughter with the heart condition, whom he so wishes he could comfort. Leo knows that Shanna needs him, as it is so hard to raise two little children alone.

I am planning to visit Leo again this coming Saturday. Leo asked if I could bring with me members of the Mormon Church. I have invited the Americus Branch President of the LDS (Mormon) Church. Either he, or someone else he assigns, will accompany me to Lumpkin Georgia on Saturday. I’d like to expose them to the work of El Refugio while we’re there together. It seems to me to be a beautiful thing that my parent’s church in W.V. can be helping Shanna and the kids while us Mennonites and Mormons minister to Leo on our end. What an unlikely partnership! Only God could have set that up!! I don’t know what the future holds for Leo’s family, but I am committed to walk alongside them on this journey. In what ways might our friends and churches unite to assist this situation? I look to God and my fellowship of disciples as we go forward in prayer.

Lord…when did we see you a stranger and make you welcome…sick or in prison and go to see you?’ And the King will answer, ‘I tell you solemnly, in so far as you did this to one of the least of these brothers of mine, you did it to Me.’” -Jesus (Matt. 25:37-40)